Home Russia Study in Russia – All you need to know

Study in Russia – All you need to know

Study in Russia – Having highest literacy rate in the world and home to many world-class universities, Russia has a distinction of being the most preferred destination of higher studies for students from around the world. A well educated and finely skilled society and a progressive economy, Russia is best known for its strong academic schools in Physics, Mathematics and Natural Sciences.

Another interesting fact about Russia is that the country has the most educated population in the world, outperforming Canada, Japan, Israel and the USA. More than half of Russians have higher education qualification. Looking at the country’s beauty and affordable education, more than 200,000 people from around 168 countries come to study at Russian universities every year. There are a lot of advantages to study in the country, but before starting your preparation, you need to look at some of the important aspects of the country.

The country’s higher education system is competitive and recognized worldwide for its degrees that consistently have high UNESCO and WHO ratings. Almost all universities in Russia provide 100 percent tuition fee concessions as well as scholarships to attract international students. Moreover, the country is a fascinating and historically influential place to offer foreign students a healthy mix of new and enriching experiences.

To ease the financial burden of international students, the Russian government and universities offer a number of scholarships for them. Some of the prominent scholarships include St. Petersburg University (SPbU) Scholarship Program- Russia and DBT-REMS India and Russian Ministry of Education and Science.

To apply to a Russian university, students need to submit the following documents: 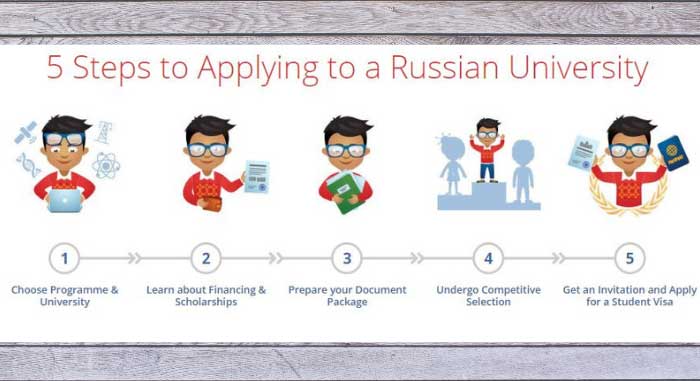 Tuition free in Russia is extremely inexpensive, which can range from $2,000 to $8,000 a year, with added costs such as room and board and books ranging from $1,500 to $5,000 a year, depending on the subject and location. The maximum tuition fee at the most prestigious universities in the country can be as high as 463,000 roubles a year (7,900 US dollars).

Study in Malaysia – All You Need to Know